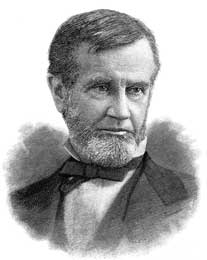 Madison has a special connection to how the world tells time. Charles F. Dowd, born in Madison in 1825 and a descendant of the original 1639 Guilford settlers, graduated from Yale in 1853. He moved to New York State, and, in 1870, addressing his long-held desire to simplify train schedules, he published a pamphlet entitled "A System of National Time for Railroads."

The system he described in his publication ultimately led to global time zones, centered on Greenwich, England. Now the demands of modern communication and satellite navigation have made time measurement accurate to within microseconds as convenient as your smartphone. But there was a time – not that long ago – when knowing the time precisely was a novelty. 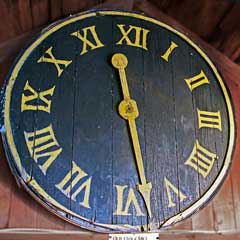 One of the Madison Historical Society’s more spectacular timepieces isn’t a whole clock at all: It is just the face from the original steeple clock on Madison’s First Congregational Church. After more than a hundred years of harsh winters and humid summers, the clock face was replaced in 1960 and given to the Society. Proudly displayed in the annex at the Allis-Bushnell house, it is more than four feet in diameter and, as was the practice during those simpler times, has only an hour hand. Interestingly, the face presently on the church steeple keeps that one-hand tradition.

Although another early timepiece in the MHS collection is in terrible shape, it has a proud history. The clock’s nine-inch-diameter wood and leather case is well worn, and its face, with Roman numerals, is barely legible, yet the brass clockworks appear complete. Its provenance is what makes it special: It’s a ship's chronometer from the sloop Humming Bird, built around 1860 by John Hoyt and commanded by Madison Captain Horace Nelson Coe (1832-1912). We haven’t been able to track down the Humming Bird’s travels, but we can all imagine the seas this once-accurate timepiece experienced and how important its accuracy was to safe navigation. And, if you put the hands back on, it still tells perfect time twice a day! 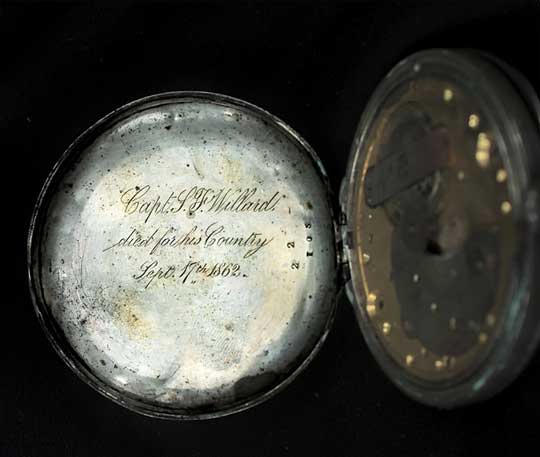 Silver pocket watch made in 1840 by John Harrison of London, is inscribed to Captain S.F. Willard of Madison

Our most poignant timepiece may be the Willard/Bradley pocket watch. It is silver, made in 1840 by John Harrison of London, and is inscribed to Captain Samuel F. Willard of Madison after his death at Antietam on September 17, 1862. The back cover of this watch is also inscribed to Willard’s beloved brother-in-law, Lieutenant William T. Bradley, who died of wounds inflicted at the Battle of Bermuda Hundred in Virginia on May 21, 1864. The watch is presumed to have belonged first to Samuel and then perhaps carried later by William, who witnessed Willard’s death. The case is well worn, and its crystal, face, and hands are missing. It is 2 ⅛ " in diameter. 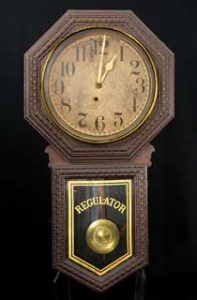 Another clock in our collection surely received a lot of attention in its day. A Regulator wall clock, circa 1865, it was Lee’s Academy schoolroom clock.  Imagine how many young faces anxiously watched those hands slowly advance toward recess time! After the school was closed, the clock seems to have traveled nearly as much as Hoyt’s chronometer; it was given first to William Scranton, the postmaster of the East River post office, and then, when the post office closed, to A. Victor Knight, who took it to Maine. From there, it was returned to Lee’s Academy in 1994 by Knight's daughter-in-law. This clock has a round face within an octagonal wooden surround. It is 32 ½ " tall, big enough that everyone in class could see it.

Even though commuters nowadays might say the arrival and departure times for trains sometimes seem to have little relation to any clock, our town figures prominently in how the world uniformly measures time. The wonder is how civilization went from sundials to super-accurate atomic clocks that divide time so finely. Now, if only we could find more of it.

See other clocks and watches in the MHS collection at https://flic.kr/s/aHskG4S1vr

Originally appeared on November 21, 2017, in a special to the Shoreline Times. Written by Bob Gundersen

Your ticket for: Old-Time Madison