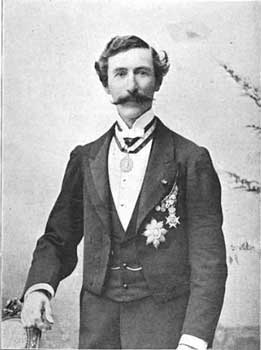 Gilbert Munger, photograph taken circa 1870. Published in the Connecticut Magazine, 1904

Born in Madison in 1837, prolific landscape painter Gilbert Munger was especially renowned in Europe where he was made a Chevalier of the Legion of Honor in France and awarded medals by the governments of Germany, Russia, and Belgium.

As his biographer Michael D. Schroeder has noted, “Munger’s name and artistic achievements have been generally forgotten until recently. In his day he was a highly regarded painter in New York, San Francisco, and London. He socialized with leading scientists and artists. But like many artists of his generation, he went largely unnoticed in the twentieth century. His rediscovery by scholars and collectors is a story in which the Internet has played an important part.” 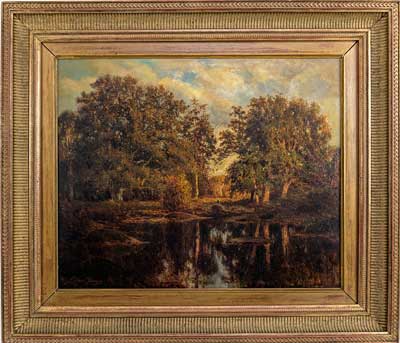 Landscape painting by Gilbert Munger titled “Forest of Fontainebleau.” Oil on wood panel,  painted in the Barbizon School style, c.1880s; in the collection of the Madison Historical Society

In August 2017, the MHS received an unexpected gift from Michael Schroeder, noted Munger expert and author of the website The Art of Gilbert Munger.

The untitled oil painting on a wood panel has been ​gessoed, as is typical. (Gesso is a mixture of plaster of Paris and glue, applied to prepare a surface for painting.) It​ is a very typical Mu​nger scene of tall trees near ​still​ ​water.​ ​ ​I​t is assumed that the scene is one of the many scenes that ​Mu​nger painted in France in ​the late 1880s in ​or near Barbizon or ​in ​the ​nearby ​forest of Fontainebleau.​ ​

The painting, bought at auction by Michael D.​ Schroeder, came from an unknown​ Belgian collector. The painting was cleaned and lightly conserved in 2017 by CT-based art conservator Tom Yost, who ​discovered upon examination of the painting that the painting’s sky has been overpainted,​ quite a long time ago—not ​newly or even recently—which Yost could discern by the yellowing of the varnish and the composition of the paints.​

​I​t is possible that ​Munger ​himself may have repainted his entire sky,​ but we have no clear evidence ​or documentation ​of that ​theory.​ ​ ​The second sky is quite well done ​and is not entirely unlike others done by Munger.​  ​In addition to its being a perfectly fine sky, Yost imagines that there may have been a very good reason for the first sky to have been covered​ or changed.​ ​The painting bears a very clear Gilbert ​Munger signature,​ identical to other Gilbert ​Mu​nger signatures. 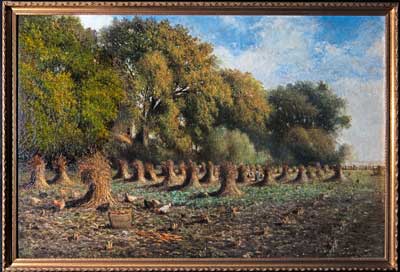 Landscape painting by Gilbert Munger of a wheat or corn field in Cazenovia, New York; oil on canvas; in the collection of the Madison Historical Society

The MHS now owns a second painting by Gilbert Munger. It is a pastoral scene measuring 30 x 45 portraying a landscape in Cazenovia, New York.  The oil on canvas is signed “Gilbert Munger”  in the lower left. Munger visited his artist friend Dwight Williams in upstate New York for three months in the fall of 1900. This picture is most likely a product from that trip or just after as Gilbert Munger died in January 1903. Roger Munger, his brother, emptied the studio and brought the pictures back to Duluth, MN where they had remained for four generations. This painting was sold to the Madison Historical Society in 2020.

The MHS also owns a cast-bronze bust of the artist, commissioned by Munger from a photo taken in Nice, France, in 1890. It was created by Italian sculptor Massimiliano (Max) Contini and is the only cast made from the original sculpture. For a glimpse at the MHS’s Gilbert Munger paintings, artifacts, and ephemera, please explore our Flickr page, https://flic.kr/s/aHsm6EpmXS.

Your ticket for: Gilbert Munger