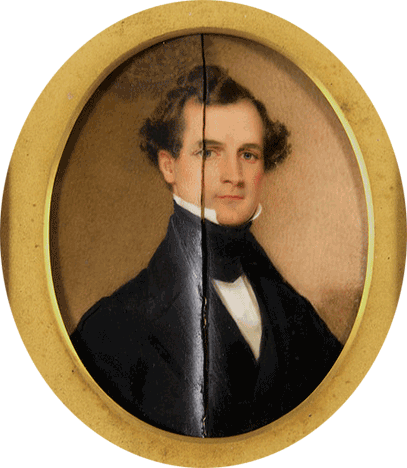 Most residents of Madison are aware that, in 1884, Daniel Hand generously provided funds--$15,110 to be precise-- for the construction of Hand Academy, the seminal foundation for the present-day Daniel Hand High School.

Not as many current Madison citizens, however, are aware that, by the end of his life, Hand had established a trust fund valued at $1.5 million with the American Missionary Society for the purpose of educating black Americans in the seven southern states that had formerly permitted the enslavement of African people and their descendants. Hand’s trust fund was, at the time, the largest philanthropic gift to a benevolent association in the history of the nation. How did this extraordinary gift come about?

Growing up in Madison

Born in 1801 in a house built in 1739 by his grandfather, Captain Daniel Hand, Daniel Hand attended Madison’s Woods District School and also received supplemental schooling at home. At age 17, Daniel decided against higher education and instead headed south to Augusta, Georgia, to work as a clerk in the grocery store owned by his uncle Daniel Meigs.

In 1822 Hand embarked upon a series of varied wholesale and retail business ventures, first with an older brother, Augustus Hand, and later with Erastus Clark Scranton, another Madison transplant. His final business partner and friend, George Williams, undoubtedly proved to be his wisest choice. By the time of the Civil War, the annual sales from the Hand-Williams partnership amounted to $2 million. More importantly, the onset of America’s “War between the States” impacted Hand, then sixty years old, in a most remarkable fashion.

Italianate house of Daniel Hand, at 47 Fair Street in Guilford, CT. Built in 1878-1879 by the builders George W. Seward and Sons. Photo courtesy of Historic Buildings of Connecticut.

Although their partnership was in jeopardy because Hand’s anti-slavery, pro-Union position chafed against the beliefs of Williams, an avowed Confederate, Hand trusted the integrity of his partner. He turned over all his business interests to Williams, aiming to return to New England to protect his personal safety. En route to the north, Hand was imprisoned in Richmond, Virginia, for a month until the authorities determined he was not a threat to the Confederacy. Remaining in the south until the end of the war, Hand found a safe harbor in Asheville, North Carolina, where he resided until 1865.

After the war, Hand returned to Connecticut, where he lived in Guilford until his death in 1891. In the intervening years, Hand’s partner George Williams managed their business interests in an astonishingly successful manner. When Williams traveled to Guilford in 1881 to visit Hand, then 80, he revealed the value of the securities he held on Hand’s behalf. Hand was incredulous to learn that his share was valued at $1.5 to $2 million--approximately $35 to $42 million in today's dollars.

Establishing a Fund for the Education of Southern Blacks 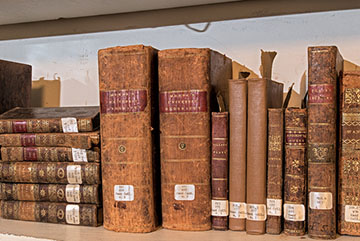 Selection of books from the Daniel Hand library

Trusting thoroughly in his belief that education for southern blacks was necessary to strengthen the nation following the Civil War, Hand used his profits to establish a fund dedicated to the education of formerly enslaved people and free blacks throughout the South. Thousands of students have benefited since from Hand’s immense generosity--and so indeed has our country.

A man of industry, integrity, and moral courage, Daniel Hand is a role model for us all.

In addition to the portrait above, depicting the philanthropist as a young man, the Madison Historical Society owns Hand’s original library of books, his wooden travel trunk, and the saber carried in the Revolutionary War by his grandfather, Captain Daniel Hand (1732-1816). For these and other images related to Daniel Hand, visit the Society’s Flickr page.

The Madison Historical Society wishes to thank Don Rankin for his original research and writing of this article.

Your ticket for: Daniel Hand