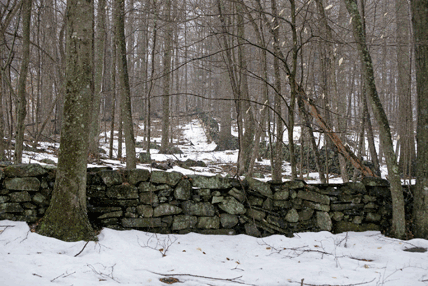 One of the shoreline's most precious and fragile historic treasures is the secluded Smallpox Burying Ground, owned and maintained by the Madison Historical Society. Tucked in the woodlands of Guilford some distance from a rural roadway that winds near the banks of the pretty East River, the quarter-acre parcel lies in the section locally known as Clapboard Hill. As former MHS president Philip S. Platt once noted in his essay on this landscape, it "will always have about it an air of patriotic sacrifice, tragedy, mystery, and woodland charm."

The tract contains the remains of Captain Ichabod Scranton of East Guilford, who died of smallpox in December of 1760 after commanding a unit of East Guilford soldiers engaged in the French and Indian War in the area near Albany.

In 1912, Frank E. Platt, the father of Philip S. Platt, purchased the land from its owner, Arthur A. Dudley. The MHS was also deeded the use of a legal right-of-way to the property, which allows the Society to access the site at will throughout the year. The area was enclosed by a stone fence, and a bronze tablet was affixed to a native boulder to commemorate the history of the site. The parcel was deeded to the Madison Historical Society in 1949, and a dedication service was held within the burying ground in June 1960. Approximately twenty-five descendants of Captain Ichabod Scranton were present.

History of the Pock Lot 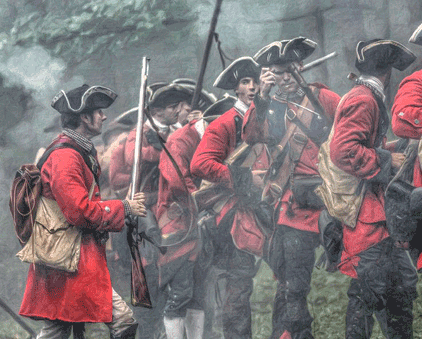 Much of this parcel's history is steeped in legend and mystery, but these facts at least are known:

At sometime between late March, when enlistment for the war began, and mid-May, when payroll records appeared, Captain Scranton had traveled in 1760 to upstate New York in service of the British Crown. He was in command of the 5th Company of the 2nd Connecticut Regiment—a company of seventy-four officers and men, mostly from the Guilford/East Guilford area. Their duty was to participate in the campaigns against the French and their Native American allies. The records of the First Congregational Church reveal that on September 6, local boy Roswell Dudley, just 17 years old, died at Oswego. In early October, Samuel Field died, also at Oswego. On November 25, 1760, at least one of the men under Captain Scranton’s command died of smallpox in Albany. That young man was Joshua Bishop, age 20.

Records indicate that Captain Scranton and fifty-seven of his men, discharged of their duties three days after Bishop's death, then traveled overland, on foot or perhaps on horseback, to East Guilford. They arrived there, most likely, in the last days of November. Scranton must have shown signs of illness at that time, having contracted smallpox due to exposure to his own men. Just nine days after leaving Albany, Scranton died in East Guilford on December 1, 1760, and was buried in sight of the East River, on the plot of land now known as the Smallpox Burying Ground. 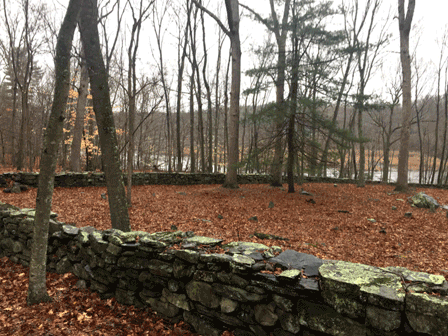 Seven or eight other victims of the disease may also rest nearby, although records are not entirely clear as to their exact identities or the causes of their deaths. A larger number of stones upright in the ground there indicate—some think falsely—that there may be as many as forty or more graves.

Some accounts imagine that perhaps Captain Scranton marched from Albany with the survivors of his entire company of men, straight to East Guilford, where they all, one by one, succumbed to the disease, in some dwelling house near the “Pock Lot.”

Clear facts about these soldiers and the other graves, however, remain obscured.

Records do indicate that Guilford, as did most towns, had a quarantine policy for smallpox sufferers and that a pest house was constructed in the area near the burying ground. Some accounts of the era relate that “settlers there provided food for the victims, but carried it only halfway along the road to the pest house and left it on a fence post where it was taken by those who cared for the sick ones.” 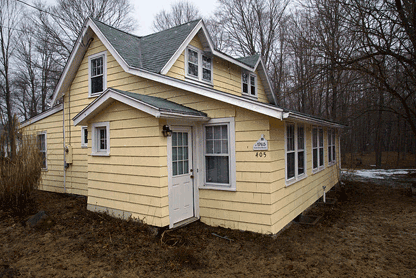 It does not seem possible that the pest house known to be constructed in the area of the Smallpox Burying Ground was actually in existence at the time of Captain Scranton’s death. It is possible that Captain Scranton suffered his last breaths in another dwelling place near that spot, but that, too, is conjecture. Records show that in 1759 the Guilford Town Selectman voted to “prepare timber and other materials for building a Pest House 30 feet long and 16 feet wide with a chimney in the middle.” In April 1760, the Town Meeting authorized the Selectmen to purchase a nine-acre plot from its local owner and to “build a Pest House on the same for the Town’s use and the Town’s cost.”  The deed for the purchase of that land was recorded in May 1760. Nevertheless, it seems that no further work was done on the project until after Captain Scranton’s death, because it is noted on December 9, 1760—eight days after his demise—that the Town voted once again to “build a Pest House to put said persons in as are suspected to have taken the infection of Smallpox.”

More than fifty years later, the above-described pest house was sold by the town to a private owner, and the story of the house and cemetery was gradually obscured by time and legend. 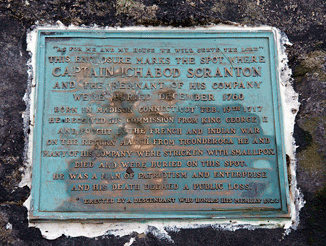 Due to the tract's location and fragility, guided tours to the burying ground are required. Special group tours, offered only by prior arrangement with the Madison Historical Society, are confined to certain months, soil, and weather conditions permitting. Inquiries are welcome. Please call (203) 245-4567 or contact us by e-mail.

Proper footwear for New England terrain is highly recommended;
A walking stick may be helpful to some hikers;
Insect repellent is recommended;
The site is not accessible to wheelchairs or strollers.

Each year a guided public hike to the burying ground is offered. Check here for an announcement of the next date. This program takes place rain or shine. $5 per person; MHS members, free. No advance registration is necessary. All participants should travel by car to the commuter lot on Goose Lane, just south of Exit 59. Please arrive before 9 am; all assembled vehicles will leave the commuter lot promptly at 9 am. A map to the cemetery site will be given to the driver of each vehicle. Allow one hour for this program. Students ages 6 and older are welcome.

Your ticket for: Smallpox Burying Ground