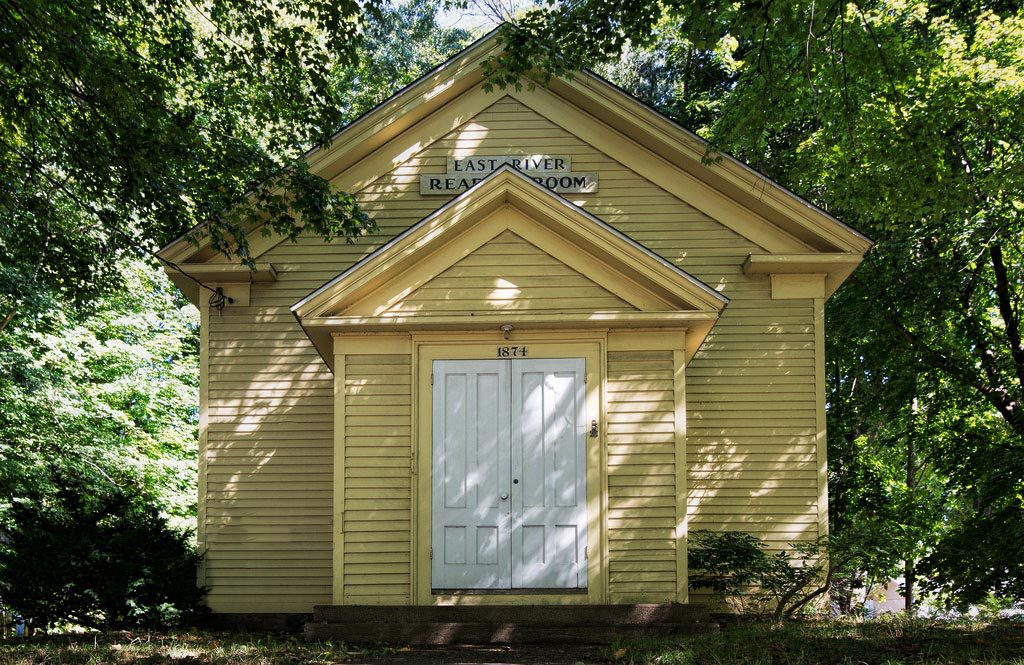 Library service has been available to local residents since 1737 when the Four Town Library was founded. It served Guilford (of which Madison was then a part), Killingworth, Old Lyme, and Old Saybrook. In 1792 a subscription library known as the "Farmers' Library" was established in East Guilford (now Madison). The Reverend John Elliot was its first librarian, and he initially kept the collection in his home. Books were lent at a fee of 5 cents per book, and the duration of the loan depended on the number of pages in the book. The 1793 catalog of that library lists about 260 volumes. During the 1860s, interest in the subscription library waned, and the book collection was auctioned off to the subscribers.

In 1874 the East River Reading Room opened, and in 1878 the Madison Library Association was organized. Membership in the association was $1 per year, and non-members were welcome to borrow books for 5 cents per week per book. The collection of 1,000 volumes was kept in such locations as James R. Meigs’s store, Fred T. Dowd’s shoe store, and, finally, the Boston Street School, where the books were housed from 1883 until 1895, the year in which a fire destroyed both the school and most of the library collection. Only eighteen books, in circulation at the time of the fire, remained. Nonetheless, within a year the Library was operating again, with 280 books kept at first in the corner of Mrs. John Wilcox’s shoe store and then in a small building on the Boston Post Road. 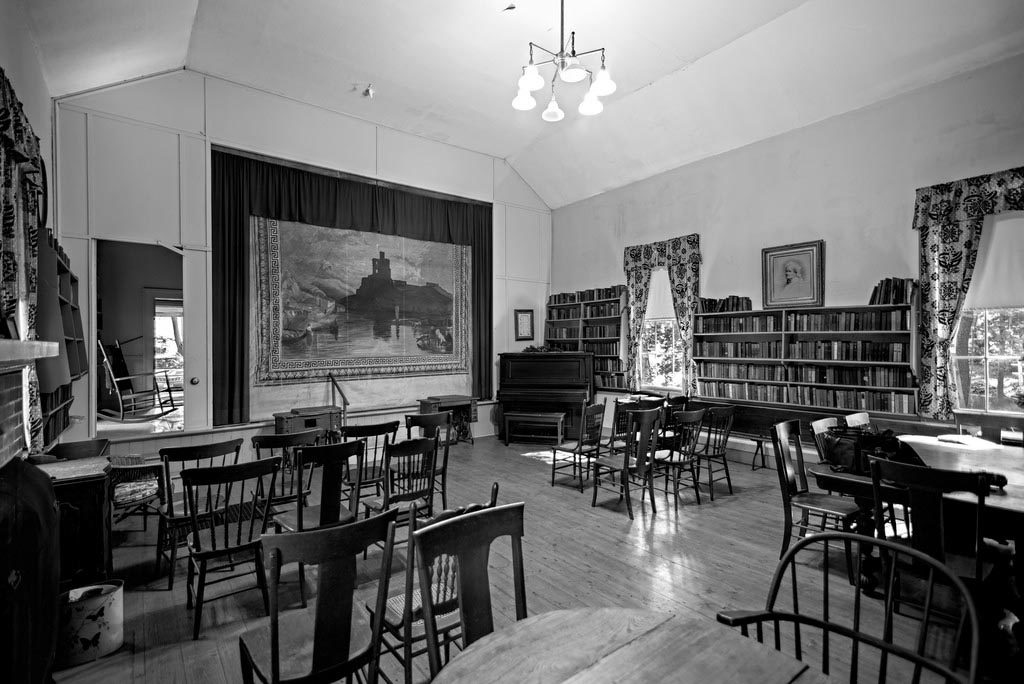 The inadequacies of this situation were resolved in 1900 when Miss Mary Eliza Scranton offered the Association the use of a new, completely furnished library building. She had had the library built, in memory of her father, Erastus Clark Scranton, on the corner of Wall Street, adjoining her family's old home. The original structure, which is the Beaux Arts section at the southwest end of the present building, was designed by Henry Bacon (1866-1924). He was an eminent New York architect who, six years later, won the commission to design the Lincoln Memorial in Washington, D. C. He had received his training at the celebrated firm of McKim, Mead and White in New York City and had also traveled abroad to study classical, especially Greek architecture, which became the hallmark of his own work. His specialty became the design of monuments and memorials, which he often did in collaboration with such sculptors as Daniel Chester French and Augustus Saint-Gaudens.

The creation of Madison’s library was overseen by a New York firm of contracting designers in charge of the building’s architecture, construction, decorations, and furnishings. The total cost was about $30,000. The Guilford Shore Line Times and County Chronicle described the building in 1900 as “substantial and the object of admiration of all who view it.” The newspaper also noted that, “No pains nor expense have been spared to make the whole structure from basement to roof perfect in every detail.” 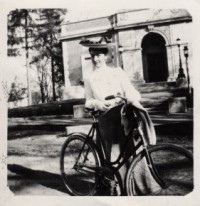 The Madison Library Association, had, as one might expect, accepted Miss Scranton’s generous offer and moved its collection of 1,100 books to the building for its opening day of July 21, 1900. The reading room and the circulation department were open from 9 am to 9 pm. The stacks, open to the public for browsing, offered accommodations for up to 10,000 volumes. Miss Mary Eliza Scranton offered the position of librarian to Mary L. Scranton, on the condition that she first acquire the necessary training. She also paid most of the operating expenses of the library and gave annual gifts of $1,500, a sum that increased slightly through the years until 1913. That year, Mary Eliza established a trust fund of $56,875, the income from which was used to maintain the building. At this time, Miss Scranton also deeded the building and grounds to the E. C. Scranton Memorial Library corporation, which had formed in 1901 when the former Library Association was dissolved. In all, Miss Scranton’s investment in the library exceeded $2 million in twenty-first-century dollars.

In 1900 the town of Madison had declared the library association to be a free town library, open to all Madison citizens, and had agreed to contribute $100 annually for its expenses. The Scranton Library is, by declaration of the Connecticut State legislature, Madison's designated free public library. The fact that the building is not owned by the town and the employees are not town employees is not unusual in Connecticut. 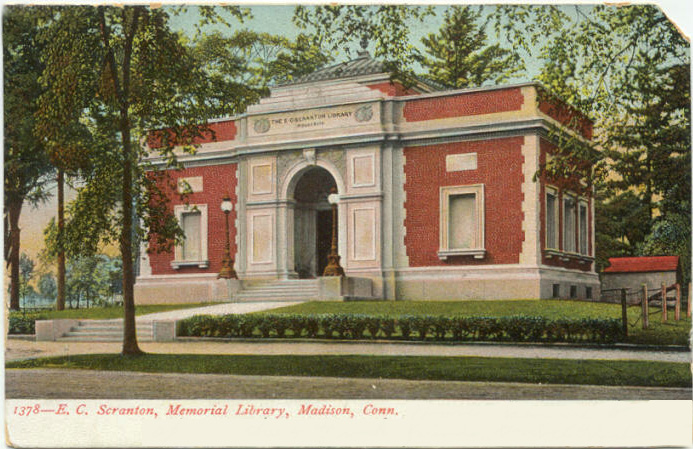 Miss Evelyn Merriwether and Miss Charlotte Poirot were among the head librarians in the decades between 1900 and 1960. By the 1960s the building had become outmoded and crowded. The book collection had swelled from the original 1000-plus volumes to about 40,000 in 1965. To meet the demands of a rapidly growing population, the board successfully raised $126,195.00 for the renovation of the original building and the addition of a two-story wing. Private donors offered more than $100,000 of this amount, the state granted another $12,500, and the remaining $12,000 came from the library's reserve funds.

In 1971 the Library Board, in its request for support from the town to bring the collection up to state standards by 1975, pledged to raise a minimum of one-third of the annual book budget through its own efforts. Fund-raising initiatives such as an annual Library Ball, an annual Book Fund Drive, and, later, a community-wide Parade of Parties dramatically increased the library's collection of 115,000 items.

In 2008 the Library Board presented to Madison citizens a detailed proposal for another expansion of the library to meet the demands of the twenty-first century. A Town of Madison referendum in 2008 asked voters to approve a maximum expenditure by the Town of $13.3 million, which represented 75% of the projected costs. The Library had agreed to be responsible for 25% of the total cost. Unfortunately, the citizens of Madison voted against the expansion. Happily, in February 2017, a wide majority of Madison voters approved a revised building plan that offered a greatly enhanced campus-style approach that preserved a small number of nearby historic buildings. 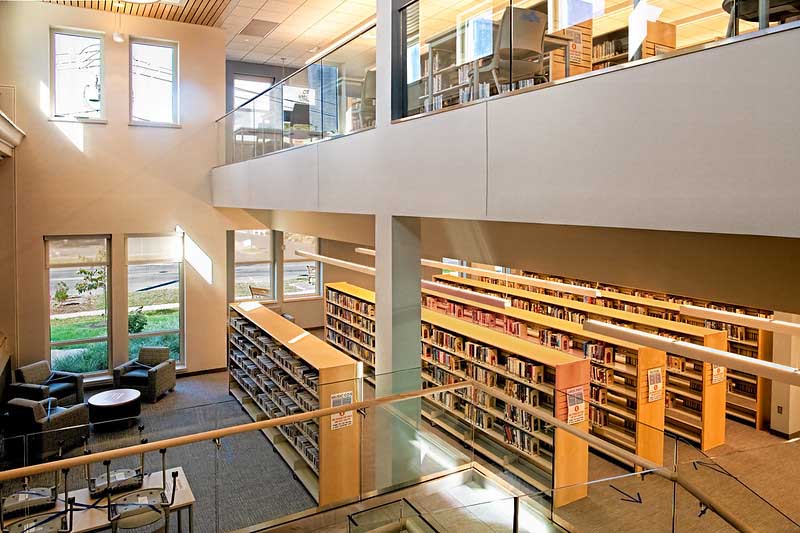 In the second decade of the twenty-first century, the Library pursued its dreams of renovation and expanded services. Despite many hurdles, the Library creatively and responsibly met its goals and addressed the concerns of the State Historic Preservation Office. Renovations to the historic structures  began in earnest in 2019, when the Library established temporary occupancy of a site just south of Route 80 and continued to meet the needs of the community in every imaginable way.

In January 2020, the Library’s Board of Trustees approved an ambitious three-year strategic plan to usher in the new chapter in the library's history. Then, just when the Library was poised for reopening, the novel coronavirus emerged as a frightening threat to global health. Plans to reopen the Library’s remarkable new building were delayed while the staff concentrated on preparing new policies, trained for its new systems, and planned a full slate of innovative programs. In response to the worsening pandemic, the Library closed its doors in mid-March and spontaneously created virtual services on a variety of platforms.

In May 2020, the librarians moved the collection downtown while strictly adhering to health and safety protocols. In July, the Library received its Certificate of Occupancy—and debuted a contact-free "Take Out & Delivery" system to make the entire collection available to the public. It also partnered with the Madison Senior Center to offer free delivery of library materials to every Madison senior. It welcomed five new staff members, unveiled a new website, and offered virtual “sneak-peek” tours. Over time, it was able to open its doors for responsibly limited in-person use. With credit due to every employee and volunteer, the Library had soon connected members of the community in record numbers.

Credit: This history of the E. C. Scranton Memorial Library was prepared by the library staff and supplemented with details from A Brief History of Madison, Conn. by Katherine Hulser Ryerson (New York: Pageant Press, 1960).

Your ticket for: Scranton Memorial Library