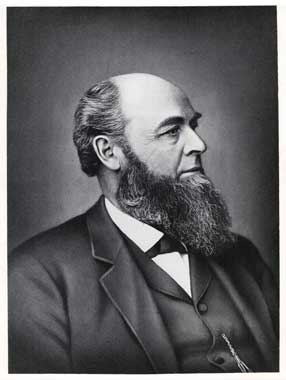 Cornelius Scranton Bushnell was born in Madison, Connecticut, on July 19, 1829, in the Bushnell Homestead on Boston Street, which is now called the Boston Post Road. The homestead, also called the Allis-Bushnell House, is owned by the Madison Historical Society and currently serves as a house museum.

Cornelius was the son of Chloe Scranton Bushnell and Nathan Bushnell, who were married in 1824. He was also descended from Francis Bushnell, who immigrated to New England with his sons in 1635. Francis settled in Connecticut Colony in 1638 and was among the original members of the company who founded Guilford in 1639. Chloe Scranton’s ancestors were also among the English settlers who established the Guilford Plantation on land purchased from the native inhabitants. 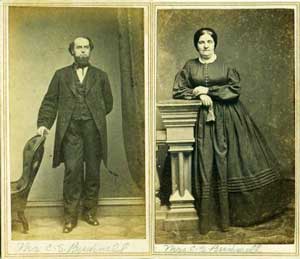 As a young boy, Bushnell attended the village school in Madison and worked on his father’s farm and quarry. He left school at the age of 15, shipping out on a 60-ton coastal schooner, of which he became the master a year later. He enjoyed his seafaring life for five years and amassed from his earnings a savings of $2,700—a sum that allowed him to consider marriage and to purchase a home for himself and his bride.

In 1850, on the day after his twenty-first birthday, Cornelius Bushnell married Emily Fowler Clark of New Haven. He used his fortune to purchase a house on the corner of Howe and Crown Streets in that city. Emily bore him nine sons and one daughter.

Establishing a Name in Business and Industry 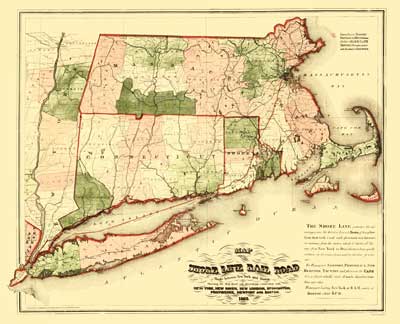 Map of the Shoreline Railroad, 1860

To support his growing family, Cornelius entered into a business partnership with his brother Nathan Townshend Bushnell. At first, they successfully sold groceries, but they later sold marine hardware, both wholesale and retail, and their enterprise became the largest of its kind in Connecticut.

In 1858 Bushnell became interested in the near-bankrupt New Haven and New London Railroad, which was then known as the “Shore Line”—not to be mistaken for the New York, New Haven, and Hartford Line, which was a much larger and more successful corporation. Investing in the Shore Line with some partners, Bushnell immediately made plans to extend the line to Stonington in order to obtain additional traffic and make connections with the railroad to Boston. Within two years, he had made the company solvent, had been made its president, and had arranged a connection with the Providence Railroad so that trains could run from New York to Boston. 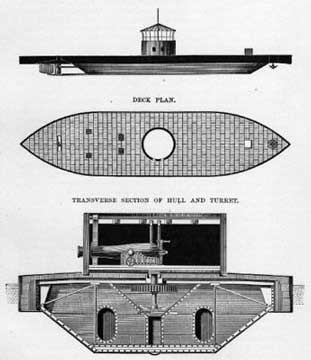 Sketch of the USS Monitor

Bushnell made powerful acquaintances in both the Connecticut state legislature and in the U. S. Congress during his successful efforts to obtain a statute that would secure equal treatment for the Shore Line Railroad against railroad giants such as the New York, New Haven, and Hartford Railroad and the New York Central Railroad. Before Bushnell’s fight for his railroad’s rights, these corporations held exclusive contracts with out-of-state corporations for through-trip services and refused to permit any railroad to write through-trip tickets that utilized the Shore Line.

Successful in his struggle against the larger railroads in Connecticut, Bushnell took his fight to Washington and secured contracts from the U.S. Postal Service for through-mail shipments on his railroad. These contacts with Washington, D.C., officials in 1860 led to the most famous event of his life: his support of and investment in John Ericsson’s ironclad warship, the USS Monitor. According to research compiled in 1899 by William S. Wells, second assistant engineer of the U. S. Navy, Bushnell “was an extraordinary man…comprehending great things.”

By the time of the outbreak of the Civil War, Bushnell had established a shipyard in the Fair Haven section of New Haven, at which he employed Samuel Pook, a scientific naval constructor from Boston, with whom Bushnell intended to build ships for the federal navy. His interest and skills in this arena seem unsurprising given his family history: his relative David Bushnell enjoyed some fame as the builder of the American Turtle—an odd-looking wooden vessel designed for submarine navigation—and other family members, in particular his Scranton relatives, had ties to both shipping and the steel and iron industries. According to The Story of the Monitor and the Merrimac, written by Bushnell’s son, the Reverend Samuel C. Bushnell, Cornelius placed the resources of his shipyard “at the disposition of the government and began building vessels for the navy.”

In Service to a Nation 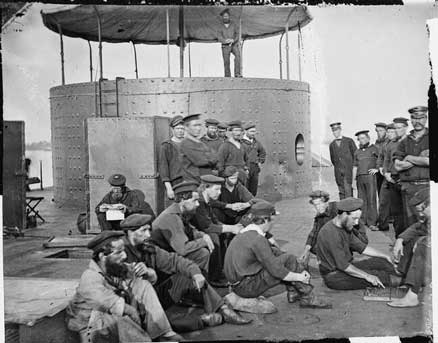 In Washington, D.C., at the time of the firing upon Fort Sumter, Bushnell enlisted in the “Clay Battalion,” a group of loyal defenders of the Union who guarded public buildings and the residences of officials until reinforcements could take over that duty. He mustered in to service on April 18 and mustered out on May 4, 1861, with a discharge that bears the signature of President Abraham Lincoln.

When Lincoln selected Gideon Welles as his new Secretary of the Navy in March of 1861, he asked Welles to mount a naval blockade that would effectively isolate the Confederacy from supplies and international support. Welles was also asked to respond to the news that the Confederates were re-outfitting the former USS Merrimac as an ironclad warship. 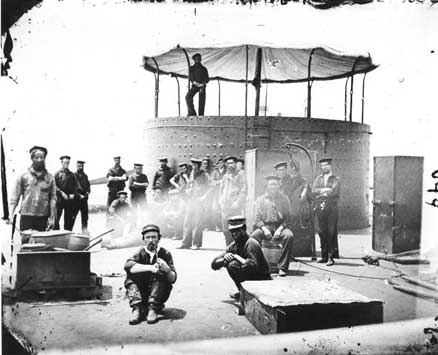 Welles drafted a bill asking Congress to appropriate funds for both endeavors, and he went to a respected acquaintance to help him deliver that draft to Capitol Hill. A former newspaper reporter from Hartford, Welles had become familiar with Cornelius Bushnell when he lobbied before both the Connecticut state legislature and the U.S. Congress in an attempt to expand his railroad franchise. Welles had found Bushnell to be an intelligent, persuasive, and influential man with powerful friends. He asked Bushnell to present his bill in Congress. The rest of that story is history; visit the USS Monitor page to read more about Bushnell’s role in the famed maritime turning points of the Civil War.

After the battle between the Monitor and the Merrimac, also known as the CSS Virginia, Lincoln sent a telegram to Bushnell, asking him to build more monitors. The shipyard at Fair Haven is reported to have built more steamships for the U.S. government than any other shipyard for the duration of the war. 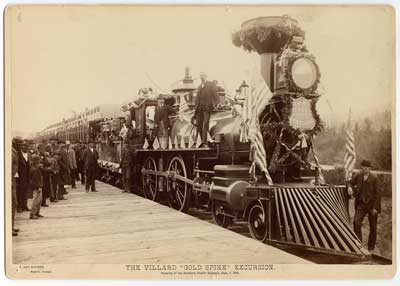 Rails to the West

After the war, Bushnell took an active interest in the construction of a railroad to the Pacific Coast. In 1863 Congress enacted the Pacific Railroad Bill, in which Cornelius was named as one of the incorporators—and the only one who remained active in the project until the completion of the Union Pacific Railroad routes. Bushnell went on to several other projects in such related industries as mining operations and bridge building.

Cornelius's wife Emily died in 1869, within weeks of the birth of their tenth child, Levi Ives Bushnell. Emily's death was an occasion of great personal sadness for Cornelius, but he did remarry quickly. In 1870, widow Carolyn Mary Paddock Hughston became the second Mrs. Bushnell. Although Cornelius greatly enjoyed his children and relatives in Madison, he devoted his energies to the development of a second railroad to the West Coast, which became successful years later as the Western Pacific Railroad. Bushnell himself, however, lost money on the venture during the financial panic of 1873. During the next decade, he lost much of the fortune he had created, and he suffered in that period from anxieties and fatigue. 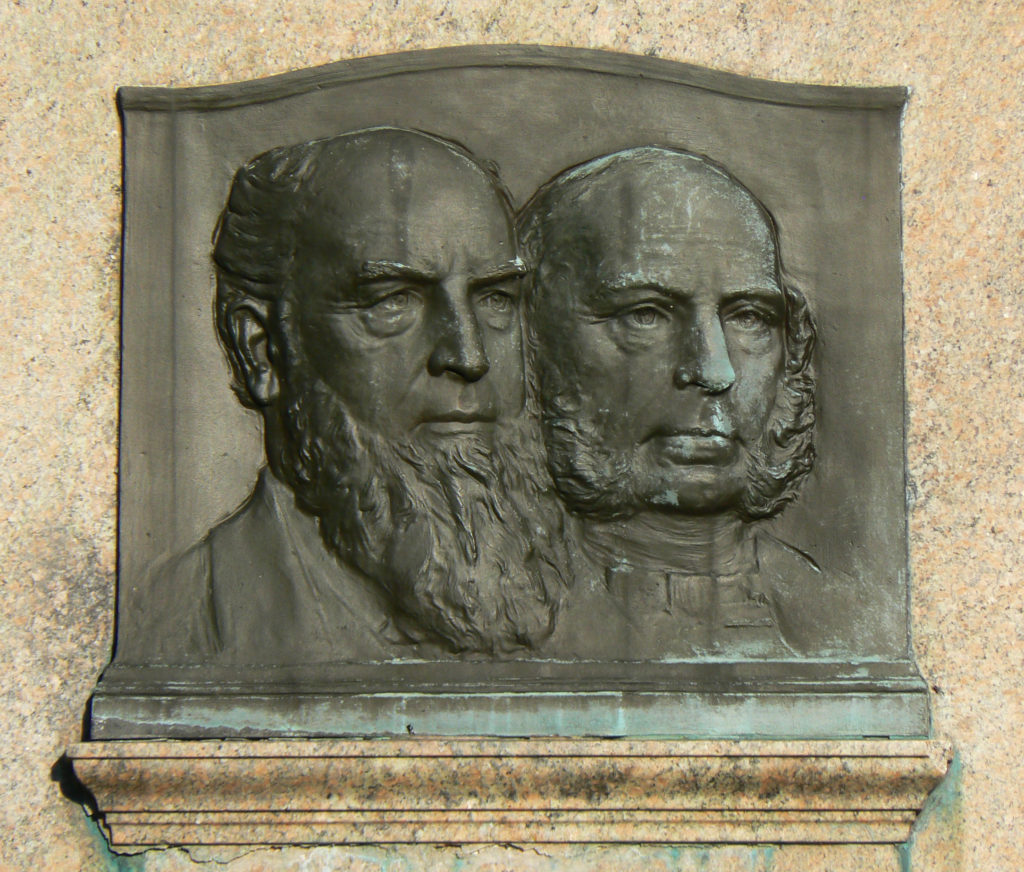 Although he reportedly regained his spirits in his later years, he became a widower for the second time in 1887, and, in 1889, two years after Carolyn's death, he married Elizabeth Ford. Tragically, Cornelius and Emily's youngest son, Levi, born on December 26 in 1868, drowned in Long Island Sound in August of 1890.

Elizabeth and Cornelius lived quietly in New York City during the last years of Cornelius's life. He died in New York City in 1896. He was buried in the Bushnell family plot in Evergreen Cemetery in New Haven, Connecticut, with military honors. The citizens of New Haven dedicated a memorial to him in 1906. The Bushnell Memorial Monument stands in Monitor Square Park on Derby Avenue, off Chapel Street. Its tribute to his life and service to his country make note of his faith, persistence, and patriotism.

The Story of the Monitor and the Merrimac. Rev. Samuel C. Bushnell. New Haven, CT.

Your ticket for: Cornelius S. Bushnell