There was a time before our time,
It will not come again
When the best ships still were wooden ships
But the men were iron men.

From Stonington to Kennebunk
The Yankee hammers plied
To build the clippers of the wave
That were New England's pride.

—Rosemary and Stephen Vincent Benét, “Clipper Ships and Captains,” from A Book of Americans, 1933 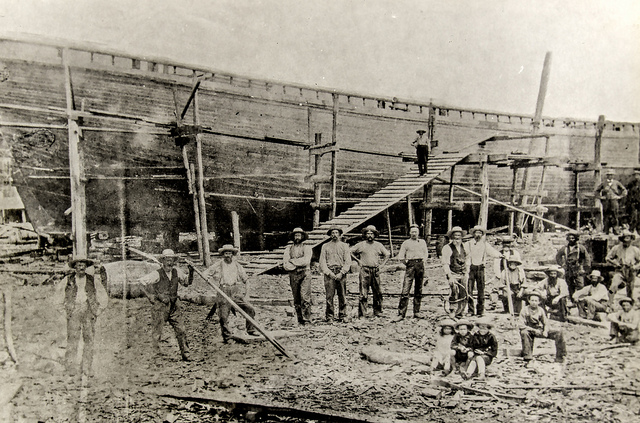 The schooner “John H. Pratt” under construction in 1890 by W. C. Crossly in Madison

The Age of Sail 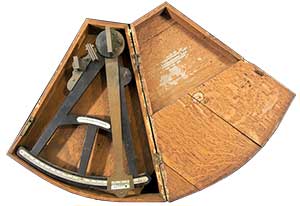 Imagine going back in time about 160 years to East Wharf and telling the rough worker you find at the shipyard there that this very spot will someday be a highlight of a town proud of its beach community and leisurely lifestyle. The brawny boat builder, begrudgingly interrupted from his hard labors hauling, sawing, drilling, and forming heavy wooden beams and planks into sailing ships, would wonder what planet your scrawny self came from! Yet just thirty years later, by 1890, the prophecy would be totally obvious. Forces of nature and of man – shipyard fires and the advent of the age of rail and steam– would put an end to the renowned and romantic Age of Sail.

The Madison Historical Society has a great array of photos and artifacts used by the “iron men” who built sloops and schooners at West Wharf, East Wharf, and along the Hammonasset River. While farming and fishing sustained most families, the shipbuilders in town uniquely provided it with a fine regional reputation and a means of transporting all the produce that Madison farmers grew and its fishermen hauled. Sailing vessels built right here carried the bounty to markets from Boston to New York City, and some of our ships even crossed the ocean.

History of Shipbuilding in Madison 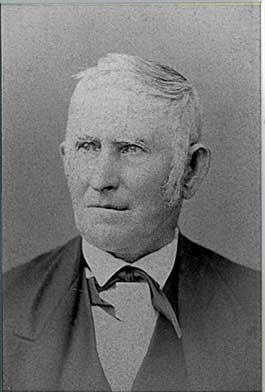 It all began as early as 1696 when Joseph Hand petitioned the town for the removal of the Hammonasset Bridge so he could bring his vessels down to the sea from his riverside works near the cemetery. Then Abel Hoyt and his son Jonathan began building ships at West Wharf for both local coastal trade and for the West India trade. In fact, the Madison Beach Hotel was originally built as a boarding house for the workmen!

At East Wharf, Charles M. Miner started a shipbuilding business in 1820. Later his son William joined him, and during the years before they sold the yard in 1883, some seventy-five vessels were constructed there. Many were famous for their speed, including the Restless, built in 1854 and used as a blockade-runner during the Civil War. A photo in the MHS collection shows crowds staring up at a large C.M. Miner schooner after it came ashore at Atlantic City on January 9, 1884, during her second voyage. Its staysail is still attached for steerage in the storm.

The Society’s collection also includes many half-ship models, made of thin strips of teak that could be disassembled and used as templates to scale and design ship hulls. The model pictured here is about 6 feet long and was designed by Charles’s son William. The ship it modeled was launched from East Wharf in 1883.

We have a construction picture of the schooner John H. Pratt, which was likely one of the last ships built at East Wharf, in 1890. In June of that year, a great fire consumed the shipyard, all its buildings, and its stored timber and planks. Most disastrously, three new ships, almost ready to be launched, were lost to the flames. East Wharf’s shipbuilding days ended that day, and, soon after, Madison’s present incarnation began.

Wooden sailing ships grew obsolete. Railroad titans launched bridges over rivers and across coves, and trains took over the transportation of goods that used to be shipped by river and sea. Soon passenger trains brought city folk to newly forming beach communities like ours--and the iron men employed for almost 200 years in Madison shipyards found other work in the nearby burgeoning cities or in service to the needs and pleasures of the tourists.

So when summer comes – and, really, it will come – and the wharves and beaches are playgrounds again, be sure to look for the ghosts of the iron men. And don’t be surprised if you catch a stern glare as you luxuriate in their workplace.

See other museum items in the MHS collection at https://flic.kr/s/aHskgxX9We.

Originally appeared in the Shoreline Times on January 8, 2018. Written by Bob Gundersen

Your ticket for: Madison’s Iron Men