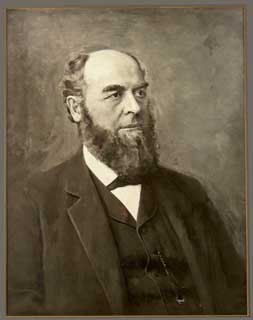 At the Madison Historical Society’s Allis-Bushnell House, we keep a strange old document we call the Lincoln Telegram. Addressed to Madison native Cornelius Scranton Bushnell, the hand-written message arrived while he was living in New Haven in 1863. Cornelius, a railroad magnate by that time, had promoted and financed the building of the famed USS Monitor and other monitor-class ships during the Civil War. He had communicated with Lincoln about the railroad industry in earlier years, but our telegram, dated June 19, 1863, offered a unique focus.

Though marred by a large inkblot, it clearly reads:

Washington is in danger! Rebel iron clad coming over land on wheels! Make nine monitors by tomorrow night and charge them to me. 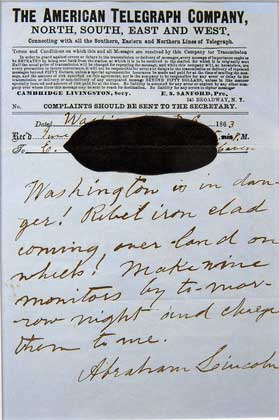 Imagine! In June of 1863 Confederate troops were advancing on Washington, and the Union faced real concern that its capital city would be overrun. Yet here, in the form of our telegram, was Lincoln joking with his buddy Cornelius. If this were authentic, it would be a priceless historical document showing a whimsical President Lincoln in the midst of a hard-fought war.

After a lot of internet sleuthing, I convinced myself that the MHS had something special. When the Society enlisted some informal pro bono opinions from expert appraisers, we received mixed assessments but we pressed forward with great excitement. We sent the document out for multi-spectral analysis, a new technology that could analyze the ink and could even penetrate the inkblot to see what was written beneath it. The analyst revealed that the chemistry of the ink was correct for the period, and he could see the date and price under the inkblot.  Curiously, the price of 30 cents was crossed out and 50 cents was inserted. We wondered, would a president have to pay for his telegrams?

Still, we clung to our hope that our paper fragment of history captured the unique historic relationship of two powerful men at the height of the Civil War.

After all, the context seemed right: Washington was being threatened at that exact time, and just two days before this memo was sent, the monitor-class ship 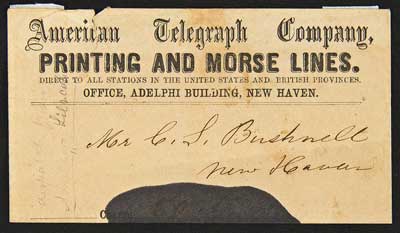 USS Weehawken had prevailed over the rebel ironclad CSS Atlanta. Plus, our framed telegram had excellent provenance back to the Bushnell family. Even when some experts doubted the handwriting and questioned the signature, we stuck firmly to a belief that our telegram might be invaluable. After all, who was to say that the president might forgo his usual “A. Lincoln” signature for our telegram’s  “Abraham Lincoln?”

So we headed off to visit yet another professional documents expert. Unfortunately, he noted that our document’s envelope is from a telegraph company office in New Haven, but the telegram itself is on New York stationery. Even if our document had been sent legitimately and had been transposed by an anonymous telegrapher from Morse code to script for local delivery to Cornelius, the envelope and its contents should have come from the same place. Furthermore, the handwriting on the envelope is different, and much neater, than the scrawl on the telegram itself. This discrepancy is an important clue since telegraphers usually had scrupulously neat writing to be easily understood by their customers. Lastly, our expert appraiser noted that Lincoln had never ever joked about the progress of the war. While he was certainly capable of whimsy and was noted for his sense of humor, Lincoln, our appraiser felt certain, would never ever put such a comment in a telegram. The war was far too serious a matter, and a telegram could easily be intercepted. 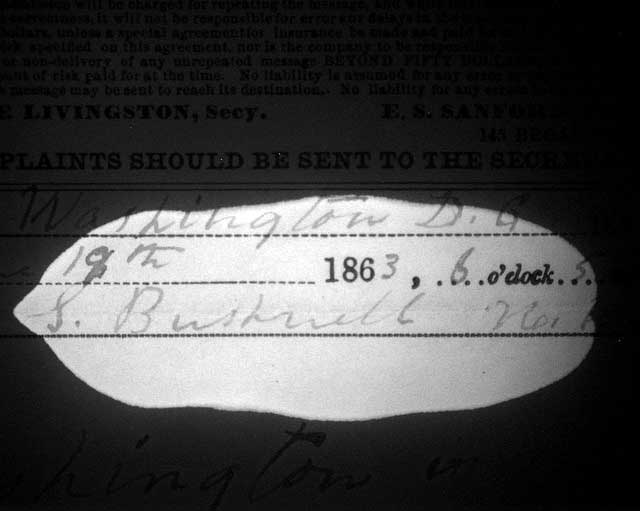 Now we wonder just what is this document? Could it possibly remain an invaluable slice of history? It may not be an authentic Lincoln document, and its content and its inconsistencies seem too odd and clumsy for it to have been a deliberate attempt at fraud. Here’s what we think now: it seems most likely to have been a joke played on Mr. Bushnell by some witty colleagues following the success of the Weehawken; you know, find a random envelope lying on a desk, grab a blank telegraph pad, and dash off a few lines to have some fun with Cornelius.

So, could it be that 154 years ago Cornelius Scranton Bushnell was “pranked?” I know I was!

See more images about this document at the MHS Flickr album https://flic.kr/s/aHskvj1eLo.

Your ticket for: Lincoln Telegram