We may think that arguments about Civil War monuments are something new, but right here in Madison, 123 years ago, a controversy developed over whether a planned memorial to the town’s Civil War soldiers should be in the form of a monument or a building with public meeting spaces.

Only one other town in Connecticut – North Haven – came to the same agreement as in Madison: Build them both!

Shortly after the end of the Civil War in 1865, and three full years before Decoration Day (the precursor to Memorial Day) was formally proclaimed, Madison appropriated $1,000 for a “Soldier’s Monument” to honor the service and sacrifice of its veterans and its 41 war dead. The town appointed a committee, but no action on the monument ensued for nearly 30 years. 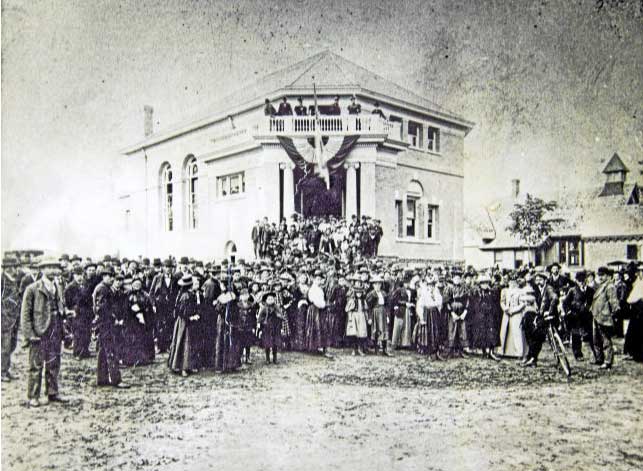 Finally, as part of Old Home Day celebrations on July 4, 1894, about 400 townspeople gathered to again consider a memorial. Many wanted a large monument on the green; others advocated for a more useful commemorative structure alongside the green. Ultimately, the meeting-hall idea won out, and the town provided $5,000 toward construction of the Soldiers’ Memorial Hall. The Madison Historical Society has its Dedication Day photo, taken on May 31, 1897. The finished hall is surrounded by well-wishers and adorned in patriotic bunting. This building, now called Memorial Town Hall, serves all sorts of civic purposes still today. 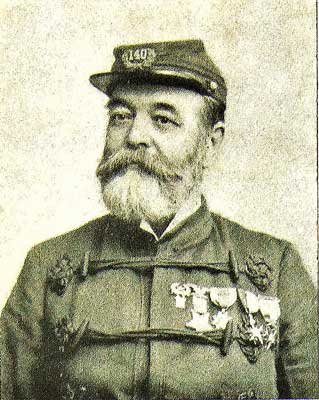 Yet even after the town had accepted the memorial hall concept, many citizens still argued for a large monument. Col. Vincent M. Wilcox, himself a Civil War veteran as well as an early Madison resident and a New York City businessman, took characteristic independent action. He made a large contribution to the Memorial Hall fund and then personally financed a fine memorial, known as the Wilcox Soldier’s Monument, that was placed in the West Cemetery.

Born in Madison, Vincent M. Wilcox graduated from Lee’s Academy and taught there for three years. While fighting at Antietam in 1862, his company colonel fell to a mortal wound, and Wilcox assumed command. Shortly after that terrible battle, Wilcox fell ill with typhoid fever and reluctantly retired from active duty in early 1863. He moved to New York City, where he eventually became president of a firm that imported photographic equipment.

On May 9, 1896, just a few months before completion of his monument, he died suddenly at age 68 in New York. Before he died, he penned his thoughts for the dedication ceremony. He praised the heroic valor of the Madison volunteers who had “risked their lives that the nation might live,” and he charged his audience with the responsibility of teaching patriotism to their children.

With the approach of Memorial Day, Madison parents may wish to fulfill Col. Wilcox’s charge at his alma mater, Lee’s Academy. Bring the family to the Madison Historical Society’s award-winning exhibit of World War I artifacts, photos, posters, and stories. Ponder the efforts and sacrifice of local people at home and on the front during the Great War, so named before we understood that such worldwide calamities would soon need to be numbered.

Originally appeared as a special to the Shoreline Times by Bob Gundersen. Click here to link to the article.

Your ticket for: Civil War Monuments