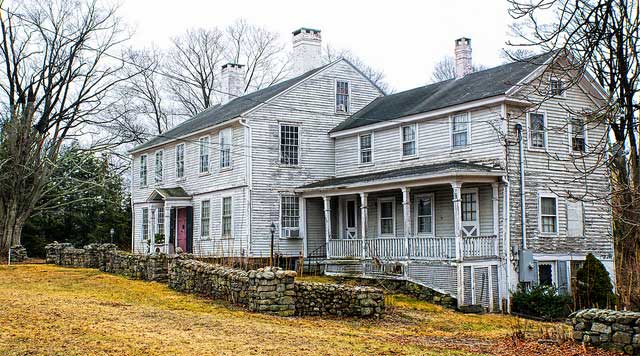 The General's Residence on 2/25/2017, the scheduled day of the Foreclosure Auction.

Some houses are historic simply because they have survived the wear and tear of many decades of use. Others are historic because they housed famous people or witnessed noteworthy events. The General’s Residence in Madison – that old dilapidated white house on the corner of the Post Road and East Wharf – is storied for all those reasons.

On a drizzly, overcast morning in late February, I went to the house an hour or so before a foreclosure auction was supposed to happen. I arrived early in hopes of taking some “as-is” photographs of the famous – or infamous – structure for the Madison Historical Society. Obviously expanded in stages over the years, the house has now fallen into a sorry state, but my photos revealed the once-glorious bones of the pre-colonial structure. I didn’t go back for pictures on a nicer day: The dismal weather had actually added to the sadness I wanted the pictures to convey.

A lawyer who met me at the house that morning said the auction had just been postponed until May. Since we couldn’t go inside to look around, I looked into the house’s history instead. It appears that Ensign Nathaniel Dudley first built on this property in 1730. Dudley also deeded land to the town to help form East Wharf Road and the Boston Post Road.

In 1799 Captain Edward Griffin, formerly of Killingworth, bought the house and either rebuilt it or built around it. The architectural studies are uncertain, but the assortment of stories about Griffin himself are noteworthy--and often sordid. The father of four sons and three daughters, Griffin sailed from Madison to the West Indies as Master of schooners that were built right here in town. He often quarreled with his eldest son, Harry, who sailed with him. One day the Captain was so angry he threw Harry overboard to drown. Harry was rescued by a passing ship and returned to Madison before his father’s voyage was completed. Imagine that homecoming!

Part of Captain Griffin’s substantial income may have derived from the slave trade. The story is told that he was holding two slaves in the basement of his house when he heard revenue officers were coming to assess his property. He walled the slaves up in the cellar and left them to die. When his estate was sold off, the wall was removed, and two skeletons were found. Some say that these two poor souls haunt the place still. 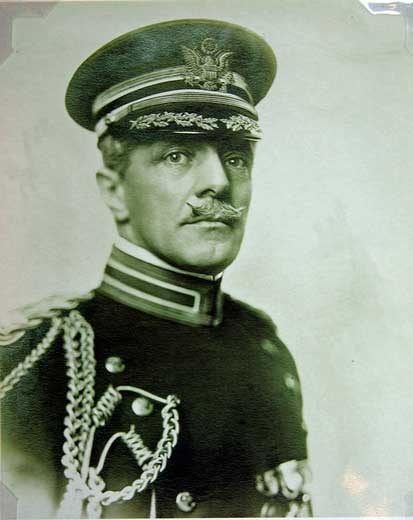 After Griffin’s death in 1802, the property was divided among his children--all except Harry, that is! The house changed hands frequently and was unoccupied from 1895 until 1909. In that year, the house was opened by newlyweds Martha Hale (whose family owned it) and Lieutenant William Wright Harts. Used primarily as their summer residence, the house presumably offered relief from the heat of Nashville, where the lieutenant was posted. Harts, who graduated from West Point in 1889 and began service with the Corps of Engineers, ultimately became a Brigadier General in the U.S. Army. He was involved in a large variety of construction projects, including river and harbor improvements, locks and dams, and army camps.

During WWI, he acted as military aide to President Woodrow Wilson, and he served with the British and French in the 6th U.S. Engineering Regiment. Highly decorated, he also served as chief of staff in the Army of Occupation, in Germany, in 1919 and 1920, and as military attaché in the American embassy in Paris from 1926 to 1930. The Madison Historical Society owns a great portrait of him, as well as the uniform he wore to White House functions and a Buckingham Palace banquet card listing him as part of the “Suite of the President” with the King and Queen present. Brigadier General William Wright Harts is the reason the Madison house is still known as “The General’s Residence.”

Since the general’s death in 1961, the building has served as a home, a wedding dress shop, a restaurant, and a bakery. But now, despite the general’s fine reputation and service to the country, his house is going to foreclosure.  Perhaps Captain Griffin’s bad karma is still at play.

See more pictures of the General’s Residence on the MHS Flickr Album at https://flic.kr/s/aHskRMYGsL.

Your ticket for: The General’s Residence