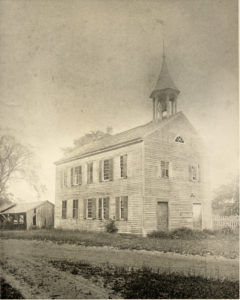 Constructed in 1821 at a cost of $1,200, Lee’s Academy was Madison’s first high school. It was established for the education of young people preparing to continue their studies at college. Originally situated on a knoll at the corner of the Boston Post Road and Neck Road, the schoolhouse was then directly across the street from the home of Captain Frederick Lee, who was the chief proponent of the project. Other supporters of the college preparatory school were such pillars of the community as Dr. Reynold Webb, Reverend David Baldwin, Reverend S. N. Shepard, and William Todd, and Professor Samuel Robinson, Jr., who became the school’s first principal. Professor Robinson built a fine home in 1820 on the Boston Post Road, across from the town green, to serve as his own residence as well as a boardinghouse for students at the Academy.

Named for Captain Lee, the Academy opened its doors to students in November of 1821. Eighty-two students enrolled in classes. Of these first students, eighty percent of them were male and twenty percent were female. Half were children from Madison, a quarter were from nearby Guilford, and the remainder were children from as far afield as Wethersfield, New York City, New Orleans, North Carolina, and Georgia. By its third year, the school included students from Cuba, Spain, and the West Indies.

The students studied mathematics, English studies, Greek, and Latin. Small fees were charged for each semester, for special classes and supplies, and for boarding at area homes. Tuition for each student was $3 for English studies and another $5 for the mathematics and classics courses.

Built of native timber and topped with a bell tower that held a bell Captain Lee had salvaged from a sunken revenue cutter, the building was constructed with a proviso that it never be moved. Just ten years after its completion, however, Lee’s Academy was relocated to the triangle at the western end of the present town green, more central to the village district. In 1839, it was moved again, to a plot opposite the northeast corner of the green, not far from where it now stands, but facing toward the south. In that year, the Center School District purchased the lower floor for use as a district school for pupils in the lower grades. The Academy held its classes on the upper floor. Upon the construction of the Daniel Hand Academy in 1884, the preparatory school closed its doors; Miss Gertrude Nash was its last teacher. By 1889, Lee’s Academy was repaired and incorporated into the public school system. When the town’s schools were consolidated in 1892, the Academy became town property.

Although it was beloved as one of the town’s most charming and well-known structures, Lee’s Academy was never quite settled, it seems. It was moved yet again in 1896, when Memorial Hall was constructed. Its new site was at the back of Daniel Hand Academy, in the vicinity of the gymnasium that presently is at the back of the former Academy Elementary School. In that spot, its lower floor was continually used for the education of young pupils until 1922, when Hand Consolidated School opened in the former Daniel Hand Academy building.

In 1923 the Madison Historical Society assumed responsibility for the venerable building, which by that era was much honored for its one hundred-year history as an institution for the education of Madison children. In that year the building was moved for the fifth–and presumably final–time, to its present location. Now at the eastern edge of Meetinghouse Lane, facing westerly toward the green, the building was deeded by the Town of Madison to the Madison Historical Society, which purchased the building for $700. The land beneath the schoolhouse was leased to the society for a period of 99 years.

In recent decades, Lee’s Academy has served the community in a great many ways. Madison’s Temple Beth Tikvah and other religious groups in need of a home have held worship services and religious education classes here. The Boy Scouts, Girl Scouts, and other clubs and community organizations have used it for meetings. During World War II, the Red Cross had office space here, and for some time Lee’s Academy served as the headquarters of the Madison Public Health Nursing Association and later as the offices of the Connecticut Society for the Prevention of Blindness.

Today, Lee’s Academy houses the administrative offices and library of the Madison Historical Society on its upper level; it is open year-round from 9 am to 1 pm on Wednesdays, Thursdays, and Fridays. Its lower level is an exhibition hall open from mid-April through late-November, on Saturdays only, from 11 am to 4 pm. Please see our Calendar for the actual dates. 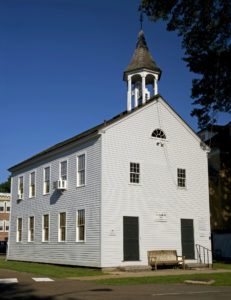 Lee’s Academy has, early in the second decade of the twenty-first century, undergone a thorough exterior restoration, an endeavor that has preserved for future generations one of Madison’s most iconic and beloved historic buildings. Through the generous efforts of donors and the support of grants, the building has a new roof, a restored cupola, restored windows with new sashes, restored sills and corner posts, new insulation, new sheathing, new clapboard siding, fresh paint, and much more.

The Madison Historical Society is especially grateful for the guidance, assistance, and donations of funds, time, labor, and materials from the following generous donors:

We are grateful for all the donations, large and small, that have ensured that the schoolhouse on the green remains at the heart of Madison.

Your ticket for: History of Lee’s Academy